Filter Free Parents
Home Parents I Have Never Been Organized. Not Even A Little Bit. And Once...

Here is one my dirty little secrets: I have never been organized. Not even a little bit.

Nearly every photo of me growing up reveal un-tucked shirts, uncombed hair, and unmatched socks.

I was constantly losing things—mittens, lunch boxes, homework and the expensive earrings that my grandmother gave me when I turned 12.

Whatever type of organization I would attempt at the start of a new school year (neat labels on the chapter dividers in my trapper keeper! Brand new pens and sharpened pencils with heart-shaped erasers!) would typically start to fall apart around mid-October.

(Side note: I’m convinced one’s sense of organization originates with our hair. I have curly to frizzy hair, the hair of the unkempt; hair that provides a disadvantage from the start. If I had been born with pin-straight hair, I firmly believe my entire life would have been different.)

When I became a parent, these skills (or lack thereof), grew even worse.

In addition to sort-of-kind-of-but-not-really keeping my life together, I now had three additional ones to add to the list. For the most part, I have been a failure at this.

I was always the mom whose diaper bag was a mess—out of wipes, hand sanitizer, filled with mysterious crumbs, disgusting tissues, and crusty bibs.

I could never manage to dress my babies up in cute little outfits or successfully wash the poop stains out of their onesies.

Once they started school, shit really got real.

Because, now I was required to keep track of the numerous school papers, medical records, and permission slips that took over our lives, as well as our kitchen counters (I curse you most especially, permission slips.

I always manage to lose them, and we receive multiple copies of each one; by the third or fourth round the teacher sometimes includes a post-it note that warns in CAPITAL LETTERS, to PLEASE HAVE YOUR PARENT SIGN THIS OR YOU WILL NOT BE ABLE TO GO ON THE TRIP AND THIS WILL BE ANOTHER THING TO COMPLAIN TO YOUR FUTURE THERAPIST ABOUT. 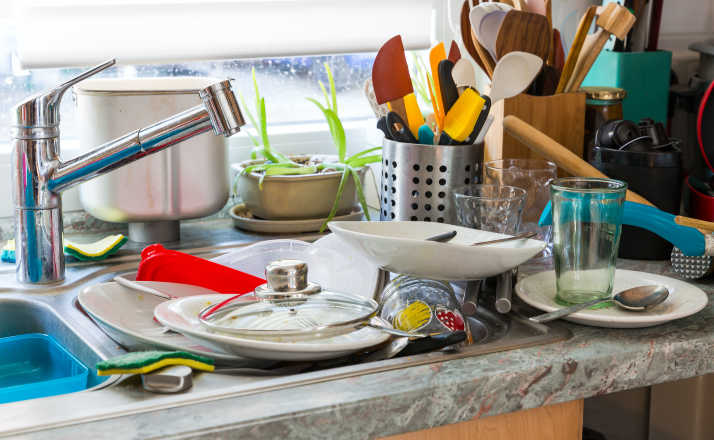 An additional casualty of this flaw has been watching how it has impacted my children.

Since there is almost nothing worse than seeing the things you hate about yourself manifest in the people you created, I have lost my shit at them on multiple occasions for…well, for being too much like me.

In moments of reason, I realize how unfair it is for me to expect my children to change when I have not been able to. I have tried, though…oh, how I’ve tried!

I have read countless articles and books about organization…none of it sticks though, not permanently. (Let’s be real—can a magazine article really change who you are, on a fundamental level?)

I reached my breaking point—aka, the moment I realized it was time to get into therapy— during a Halloween school play that my older son was in.

I was shopping at the grocery store when I received a “Where are you?” call from one of my mom friends, reminding me about the play.

Not only had I forgotten about it, but the play was starting in five minutes.

In a panic, I left my grocery cart in the middle of the aisle and raced over to the school. When I finally tip-toed my way to a seat in the auditorium, I noticed all the kids on stage (except my son), were wearing orange clothing. Strike 1,288.

I searched and prayed for another non-orange-wearing kid so my son wouldn’t be the only one, but there weren’t any.

It was a sea of orange…orange pants and socks and God help us orange sneakers on the offspring of one particularly ambitious parent. The kids, awash in a fluorescent blur of adorableness, half-sang/half mumbled their way through a sweet mixture of songs, all captured on video by moms with straight hair and perfectly manicured nails (have I mentioned that my manicures always smudge and peel?)

When the show ended, my son ran over to me. However, instead of greeting me with an excited hug as he usually did, he just stared at me and asked: “Mommy, why did you forget orange clothes?”

He couldn’t possibly begin to understand why I had forgotten his orange clothes. Or why I was late.

Or why I continuously packed him the wrong lunch, or forgot to put his homework in his backpack, or forgot about the playdate I had booked for him last weekend. He had no concept that I was a separate person from him, one who came into motherhood with a baggage full of disorganized issues.

I just hadn’t realized how much my issues would bleed into my role as a mother.

Even though I loved them to the ends of the earth, it wasn’t enough; I had to try to get ahold of this issue for my sake, as well as the sake of my family.

My therapist has helped me unpack some of the causes of my disorganization, and the roots it has in my chaotic and dysfunctional childhood (get in line, right?)

She has helped me come up with useful strategies to help combat this problem, as well as some of my other issues.

Of course, I regress and mess up all the time, but it’s better than it used to be, and I try very hard to focus on and build on that.

In addition, she has helped me realize that it’s not entirely my fault.

Of course, it would have helped if I had gone into therapy when I was pregnant with my first child, but I can’t beat myself up about that, because, as she has pointed out, these kinds of things just aren’t talked about enough with expectant parents.

It’s not as if “What to Expect When You Are Expecting” has a chapter entitled:

“How to Get Your Shit Together Before You Get Pregnant” or,

“How to Not Pass Your Bullshit on To Your Kids.”

We are treated to hundreds of books and articles on burping and dressing your baby and buying the perfect crib, when what we really need is for one of our trusted loves ones to take us aside and set us straight about parenthood, something along the lines of:

“The baby phase is incredibly important. But it’s also very temporary, and it is much more important to take care of your mental health before you learn how to change a diaper. So, if you aren’t already in therapy, get your ass there now.”

In other words, we need to talk about mental health before we talk about the other stuff.

None of it matters if we aren’t, at the very least, aware of the personal issues we are bringing into our new role as parents, and, at best, willing to work on them.

We can buy every single trendy baby gadget on the market and learn how to change a diaper with one hand, but if we aren’t working on our mental health, all that other stuff won’t matter much at all.

It’s time to shift the conversation and realize our children can only benefit from our willingness to try to work through whatever our personal issues happen to be.

So, whether it’s not being organized, or being too organized, or dealing with trauma or addiction and/or any and all of the above—this is the stuff to confront before creating a baby registry (if our babies could talk, they would probably beg us to work through our problems before debating the merits of heated diaper wipes.)

Let’s stack the odds in their favor by examining, exposing and trying to work on our flaws—before, as well as during the process of raising our families.