New parents stress over how to stop a baby from crying, which is understandable. What they don’t realize is that a new nightmarish noise, toddler whining, is headed down the pike, If baby cries are torture to the ears, the shrieks of a whiny toddler are corrosive to the soul. Once a parent hits this stage, they’re usually willing to try anything to put a stop to their beloved offspring’s incessant, high-pitched complaining.

So… How Do You Get Your Toddler To Stop Whining?

I’ll start by saying: There is no magic bullet. You can’t simply hand your toddler a chewable tablet of anti-whine and be on your way. (If you do come across such a tablet, please stop what you’re doing and notify me immediately). Still, there are a lot of things you can do to lessen the amount of whining in your life. 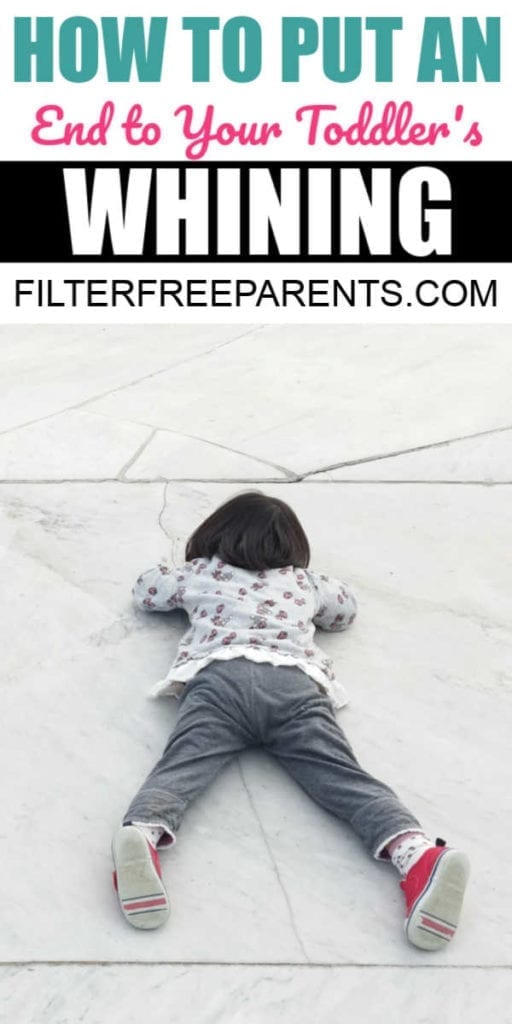 On its face, this seems logical enough (so if you just muttered “No Sh*t, Sherlock” to yourself, please stay with me). However, a lot of parents unintentionally encourage their toddler to whine more with the way they respond to their toddler’s whining.

Does this scenario sound at all familiar to you?

Toddler whining reaches a fever pitch. You think to yourself,

“FOR THE LOVE OF ALL THAT’S HOLY, YOU CAN HAVE WHATEVER YOU WANT, JUST PLEASE STOP MAKING THAT SOUND!”

Then you give in to the tiny toddler’s demands.

If this is something you’ve done, first of all, solidarity fist bump to you! I know how hard it can be to keep your cool when a whiny kid has grated away every last one of your nerves. Nevertheless, giving into a toddler’s whining rewards their behavior. You’re giving them your attention and their way. This only encourages your toddler to whine even more — and ain’t nobody got time for that!

Yes, in the short term, sticking to your guns in the face of a full blown whine-fest may be painful. However, the payoff is that you will greatly reduce whining incidents in the future.

Try to prevent whining from occurring in the first place

Life’s not perfect and we certainly can’t make everything perfect for our kids all of the time. However, there are many times you can prevent whininess from occurring in the first place with a little advanced planning.

Is your toddler easily overstimulated by loud noises and public places? When possible, avoid taking them to run errands at the busiest times of day. Plan your outings for a time that’s less overwhelming (for the toddler AND you).

Does your toddler have a particularly hard time when he or she is hungry? Overtired? Then forgetting a snack or heading out at naptime is probably a recipe for a whiny kid. Triple-check that your snack supply is well-stocked and don’t skip nap for an outing unless your life depends on it!

Don’t think of this as catering to your toddler — think of it as setting your toddler up for success (and keeping you from a psychotic break).

Sometimes toddlers whine because they’re toddlers and there’s not a darn thing you can do about it (that’s why the other type of wine exists). However, frequently, a child’s whining is actually a cry for attention.

I’ve found that my kids whine the most when I am distracted. I may be trying to start dinner or put the finishing touches on a work email, when *BAM*– the whining and screeching begins. 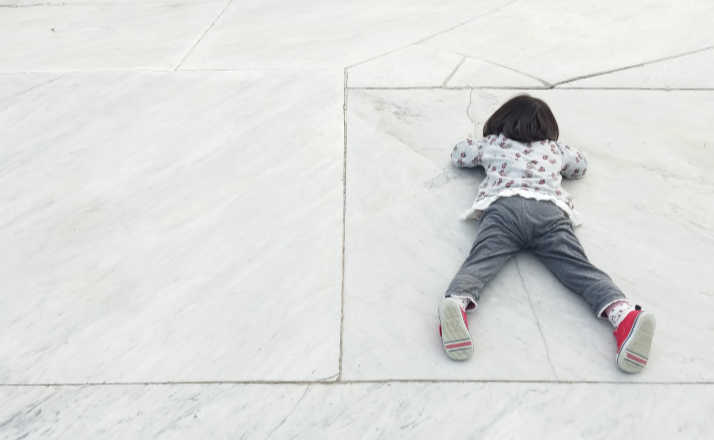 Sometimes, tasks like these simply can’t be avoided—but a lot of times, what I’m doing when my kids starts whining is significantly less urgent.

If I give my kids my full attention by putting down my phone, turning off the TV, or setting aside my laundry-folding (ha, who are we kidding? I almost never fold the laundry!), the amount and severity of whining drops dramatically.

Show your toddler the difference between asking and whining

Sometimes your toddler just needs to be reminded of the appropriate way to ask for something. While you, as an adult, know it’s not okay to throw yourself on the floor and beg for something at an ear-piercing decibel, this is not necessarily common knowledge to a toddler.

Calmly point out the difference between making a reasonable request and whining. (Note: this is not an opportunity to mock your child while fake whining yourself. It’s tempting, for sure, but it’s ultimately demeaning and unhelpful).

Simply state the child’s request in an appropriate tone and encourage them to repeat it.

Reward your toddler for NOT whining

Positive reinforcement is one of the most effective behavior tactics with toddlers. Young kids want to please their parents, so reward the behavior you want to see.

This doesn’t mean you have to stand there handing out M&Ms every time your toddler behaves appropriately (although sometimes, desperate times call for desperate measures). Praise is one of the highest rewards you can offer a toddler.

When your toddler uses an appropriate tone, instead of a whiny voice, praise them.

When your toddler starts whining, but then stops again, praise them for getting it together.

When a situation that would normally lead to your toddler whining (such as being told, “No,” or general disappointment) is handled calmly, you guessed it — praise them!

I get it. Whiny kids are incredibly obnoxious. I’d generally take a full-blown, screaming, raging tantrum over a toddler whining nonstop.

When I’ve hit my limit for whininess, I have certainly fantasized about pulling a Van Gogh and cutting off my own ears. Still, whining is developmentally appropriate and culturally universal for toddlers.

While you can certainly take the aforementioned steps to lessen the frequency and severity of your toddler’s whining, you probably can’t eliminate it altogether. One of the greatest assets on your side is time. Toddlers generally grow out of this nerve-grating behavior over the course of a few years.

Of course, each age and stage brings new and exciting obnoxious behaviors, but that’s a subject for another day!