Filter Free Parents
Home Kids Elementary Letting the Kids Finally Hug Their Grandparents Was What We All Needed.

My in-laws live three miles away and they hadn’t hugged their grandkids for two and a half months before we all cracked.

Part of it was on my end.

I was beyond jealous of my friends who were allowing grandparents to care for their kids, some even going so far as to have their kids go to the grandparents’ overnight during the week while the parents worked (and then Netflixed and chilled to their heart’s content in the evenings).

Part of it was on their end.

They were scared at the beginning of lock down because we had no known treatments for COVID symptoms. Now that the curve has flattened significantly in my state and there are some treatment measures in place for sick patients, they feel better about risking potential exposure.

More than that, they decided enough was enough and wanted the sweet, sweet snuggles of their grandchildren.

I think what pushed us all over the edge was my three-year-old.

My six year old is much more able to understand the WHY of quarantine and is doing okay with being home, despite some generalized anxiety and depression-inducing distance learning.

The three-year-old has really struggled, though.

He asks a lot of questions about death, I think to make sense of the information he’s getting from the bits and pieces of conversation he picks up and the facts we’ve given him about why we’ve stayed home and away from others all this time.

He’s angry and sometimes violent with objects and people, I think because he doesn’t quite know what’s going on and has lost many of his usual grounding attachments.

I was telling my mother-in-law about my struggles with my son.

I’d had to call the pharmacy earlier that day and, while I was on the phone, he’d mummified himself with painters tape.

He’d wrapped an entire roll around his midsection and I had to spin him out of it like Gwenyth Paltrow shedding her breast binding in Shakespeare in Love.

Later, he’d ripped apart the craft his sister and I had made that morning and was attempting to murder a library book when I’d found him and wrenched it away, only ripping one page.

My mother-in-law called a family zoom meeting with us and my sister-in-law who also lives in town and has kids.

We set the ground rules: if people were being relatively safe about social distancing, the grandparents would start hugging the kids.

If anyone got sick or showed symptoms, all contact would stop.

Most significantly, we all agreed that there would be no blame or resentment if someone were to get sick. Being together is a risk and we all agreed to take it.

My in-laws came over the next day.

When I told my daughter they were coming over she said, “Maintain social distancing?” She sounded like a little government official. “Actually,” I said, “No. We’ve decided it’s okay for you guys to hug again.” She smiled.

My kids had their noses pressed against the window by the front door in anticipation. 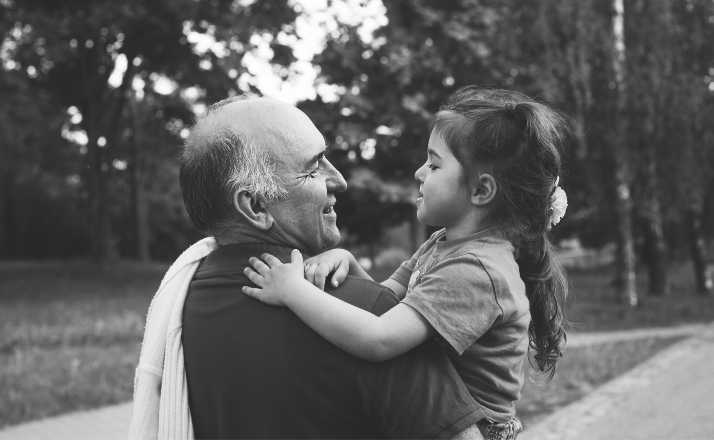 When I announced that the car had pulled up, the kids sprinted out the front door to the driveway and flung themselves at their grandfather. Then they went in for the grandma attack. We were misty-eyed.

Then my three-year-old asked, “Where’s my present?”

“I’m your present!” My mother-in-law said. My son started to cry. All was normal.

He got over it and we invited them inside for the first time in months.

My mother-in-law lightly wept and held them and then they played a board game, showed them their fort, played outside and, throughout it, came up to them with hugs and kisses and snuggles.

When it was time for them to go home, we made plans to go to their house this weekend and we said goodbye, confident that we’d see each other again soon.

Within five minutes of them leaving, both kids fell asleep without eating lunch.

It was the first simultaneous kid nap of the quarantine and only the third or fourth time my son has napped this whole time home.

I didn’t even know what to do with my pocket of quiet time.

I went in and checked on them to make sure they were alive. Both were sleeping peacefully. It was like they got what they needed to relax, to feel safe enough to rest their busy, anxious bodies.

They may or may not have understood why we couldn’t see their grandparents until now.

I know they were both worried in their own kid-logical way about their grandparents.

My daughter crept into our room at night, telling us she was worried about the virus.

My son asked about how old his grandma was and wondered at what age she would die.

My telling him we didn’t know when we’d die but that everyone dies eventually did not satiate his curiosity.

Both kids were horrible on video calls, actively sabotaging any attempts at conversation. My theory is that their disobedience masked their sadness, a theory that was confirmed by my daughter after a particularly bad video call in which she tried to moon everyone.

Hopefully, by getting their grandparent snuggles, my kids feel less scared of the big, bad coronavirus and can trust that we are taking care of them and each other, both in terms of staying safe from illness and by showing up for each other, loving each other, and being a whole family.