Filter Free Parents
Home Kids My Kids Share A Room Because That’s Where The Inside Jokes are...

My kids share a room, not because they have to but because they want to. And because it was a choice, not a have to, there are times that I question if they’re still happy sharing.

There are times when I wonder if we made the right decision cramming them in one room. Creating little to no personal space or alone time for either of them.

But then I check on my sleeping babies at night, and I find them in one bed. Together.

Sure, there are two beds in their shared room, but only one ever gets used. Because beds side by side isn’t close enough for them. They prefer to be sandwiched in tight in one bed. Snuggling. Talking. Giggling. 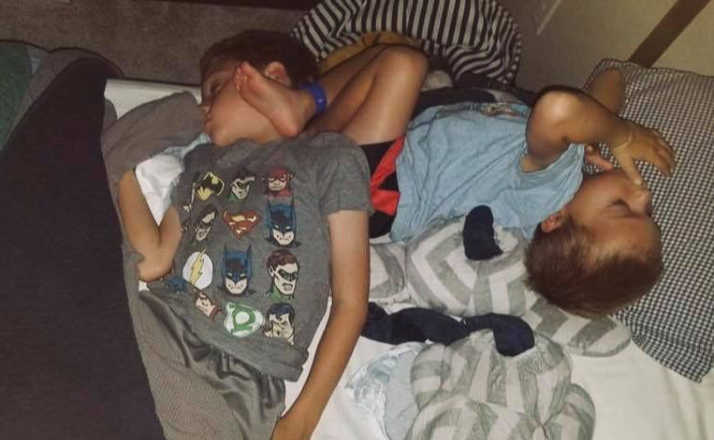 So would they sleep better in separate rooms?

Would they go to sleep earlier and sleep in later?

Would there be less sibling battles?

But oh, all the memories they would miss.

They’d miss all the giggles about smelly sounds. All the books read together under the covers with flashlights. All the plans and adventures they dream up together. All the problems they solve together.

Apart, they may go to bed angry, but they never do when they’re together.

This is where the memories are made.

Right there in their room.

A mother can only wish for such a bond between her babies.

So when I ask myself if it’s time to separate them, I go up to check on them while they sleep, and there they are. Holding hands.

So yeah, my life might be a tad bit easier having them sleeping apart.

They might drift off to sleep a little sooner. They might sleep in a bit later. But my heart wouldn’t be nearly as full. And neither would their’s.

They are each other’s comfort and security. A built in safety net sleeping right alongside them. They have each other, and I rest easier knowing they watch out for each other.

They love each other so much, they aren’t even bothered with a foot in their face while they sleep. Now if that isn’t love, I don’t know what is.

Trump Declares He Is Banning T…

19 Funny Tweets About The Swampy Su…

So… 2020, am I right? What a year. What a crazy, broken, dysfunctional, dirty, flaming dumpster-fire of a year. So … Read More