Filter Free Parents
Home Kids Elementary My Son Said, “Don’t Post It” About The Picture, And Something Inside...

Pictures have always been my thing. If you check my bookshelves; they are full of albums and scrap booking.

Over the last two years my camera roll has gone from thousands of pictures, to hundreds.

I take less pictures now than I ever have.

I have always been a person that is acutely aware that time is passing by. In another life I have been known to incessantly snap photos of every moment because I wanted to remember them.

And by another life I mean when my children were still small and manageable and pre-tweens.

I equated memories with photographs.

If it wasn’t captured on film and subsequently posted somewhere for the world to see did it even happen?

I was that person who would prop up a video camera on a table and let it record so that I could catch my child’s first roll or step or word or whatever first or potentially last milestone they were approaching.

Often times there was yelling and bribing and a lot of:

“Can you just take this one picture for me?  Seriously, is that too much to ask?”

And if I am being honest, when I would look back at said pictures, I remembered the yelling.

The fight that it took to get something that we pretended was good, but it made me remember that it did not feel good.

As years passed and camera clicks progressed and storage of photo apps filled up, my kids started to turn into actual people (as they do) and my oldest got there first (as he should).  Insert the moment where my idea of capturing memories changed.

Not too long ago I asked my first born to pose for a picture and he, on the third-ish pose, said to me: “Don’t post it.”

Now, how he even knew I posted pictures should be a story in and of itself because I never went around taking pictures and then saying to my kids

Or maybe I did.

Either way, kids know, man.  They watch everything we do even when we think they aren’t.

And that’s why it should be in a story in and of itself.

Anyway, at the moment it wasn’t a big reveal. There was no pause for dramatic effect or musical interlude to highlight the moment. 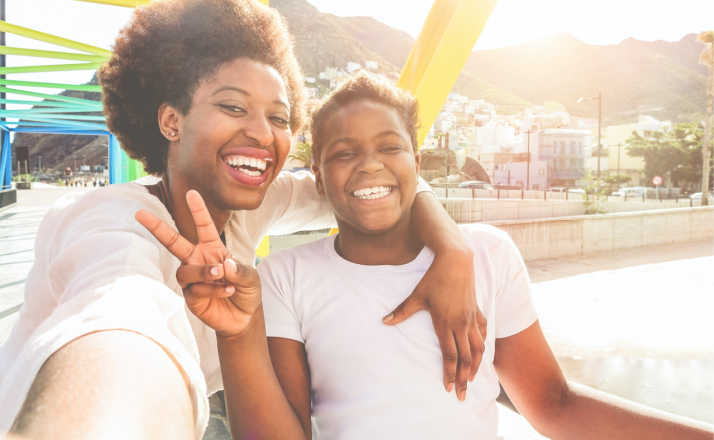 But, it struck me as if there was.

In fact, it may even be a moment so mundane to my son that I don’t know if he even remembers saying it. And to be honest, I don’t remember what I was taking a photograph of or what moment I was trying to capture and that right there should tell you everything you need to know about what I am trying to say.

Anyway, I thought to myself, if he is old enough to ask me not to post it, I should respect that because how would I feel if I asked someone not to post a picture of me and they did it anyway.

Violated. That is how I would feel. And betrayed.

Even if I thought it was the most handsome, amazing picture, he did not want the world to see it.

He must have had his reasons which of course I was too absorbed in my own thoughts to ask him why.

Ever since, taking pictures now has new meaning to me. I have had to reevaluate my mindset. I have had to put away the phone and not even take a camera when we go places. I had to stop and ask myself:

Why am I taking this picture?

Why do I want to capture this memory?

What is my motivation?

I am looking at you social media likes.

Is this picture truly for me?  Or do I need faux validation?

I realized that even though I claimed I was harassing my family to pose in pictures so I could savor the moment, when I really wanted to relive a memory, I wasn’t opening photo albums or watching videos.

I went to a quiet space. I closed my eyes and I really relived it. I got lost in thought.

I replayed the moment in my mind. I remembered how it felt to be there, what sounds filled my ears, what scents I inhaled, what conversations we had.

I realized that I wasn’t getting what I wanted out of pictures.

I was getting that out of being present. Soaking up the moment and really living in it gave me the most joy.

So, I decided to stop taking camera pictures and committed to taking mental ones.

I now stop to breathe in the moment and really absorb what is happening around me.

Every now and then, if the moment is right and I’ve gotten my mental picture solidified into my memory and the moment is still happening, I’ll pull the phone out of my pocket, open the camera and snap a picture of what is happening exactly as it happens.

No more incessant “Get together and smiles” and “please just one picture and then you can get back to playing.”

That’s what our annual to bi-annual to never seem to actually happen professional photographer sessions are for.

I’ll ask once. And in the end, I will take the picture that accurately reflects the moment.

The blurrier, the better.

Because when I take that photo back out I want to remember the beauty of it not the frustration I felt from being unable to obtain a perfect pose for…well, what, exactly?

The world to celebrate?

So, no more posting moments that are mine. At least not often.

Something inside of me changed the day my son asked me not to post his picture.

I had to acknowledge that maybe I wanted perfect pictures to impress the masses.  I had to reassure myself that lots of likes and some shares and kind comments did not prove that we were having magical family moments.

Our moments are magical because they are ours.

Now, when I scroll through my camera or my cloud or my photos, I am overcome with re-feeling the experience and that, my friends, is what makes a picture worth taking.


A Pre-K Class Created A Cookbook Of…