Filter Free Parents
Home Health + Wellness Different Needs Not One Thing Can Prepare You To Be The Parent Of A...

They often say God only gives you what he thinks you can handle. That diamonds can only be made under immense pressure. But how do you shine when the world around you is on fire?

Not one thing can prepare you to be the parent of a mentally ill child.

There is not one handbook, not one doctor, who can with 100% certainty provide you with some magical cure. There will be countless recommendations, medication changes, and doctors.

If your child is young, there may not even be a diagnosis.

I noticed small things when my daughter was young. She refused to be held by strangers. Any small changes in routine would throw off our entire day.

We welcomed our second child when she was just shy of nineteen months, and that’s when my carefully constructed world came crashing down.

Most children struggle with the birth of a sibling. There is typically an adjustment period, and essentially you fall into a new “normal”.

My new “normal” was a hell that I wish on no one.

The image that will forever stick in my mind is of my second daughter, barely two months of age, lying on the floor with a large red welt on her face.

My oldest had waited until I left the room to hit her with a nearby comb. After lots of tears, from myself included, I thought we could conclude this was her way of acting out and it wouldn’t happen again.

Soon, I couldn’t leave my youngest daughter alone because the moment I was out of sight my oldest would physically harm her.

After speaking with her pediatrician, we were instructed to seek out a play therapist.

Their advice: don’t let your oldest daughter out of your sight.

While I appreciated the intent, I couldn’t justify essentially neglecting the needs of my infant child and giving my oldest exactly what she wanted; my undivided attention. I was on the hunt again for help, desperate to find answers.

You would be amazed at the lack of mental health care for young children.

If you are lucky enough to find a healthcare provider, it’s a 1 in 10 chance they take your health insurance.

We went to the autism center and had her tested. She fit some of the criteria, but not enough. We were told to have her assessed for occupational therapy, maybe it was a sensory issue.

Yet again, she fit some of the criteria, so we decided to take a stab at it. P

raying it would alleviate my daughters’ insatiable appetite for inflicting pain on her sister.

Shortly after, I walked in on my oldest with her hands around my daughters’ neck while they were in the bathtub. 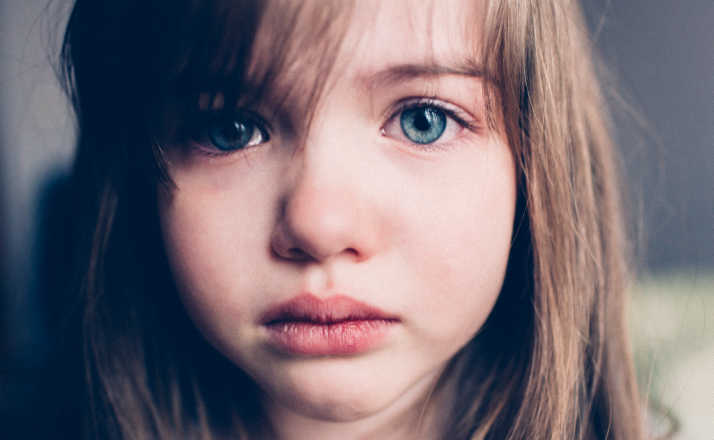 There is no greater pain, as a mother, than to be torn between your children.

To love them with such ferocity it almost becomes a palpable force you can reach out and touch. A constant battle royal between your head and your heart. You begin living your life teetering on the edge of a cliff, waiting for the gust of wind that will send you plunging into the darkness below.

You can’t see or touch it, but you know the moment it enters your body. Your heart rate changes and your stomach begins to turn. It is infectious.

We have all felt the invisible weight of mental illness in my house.

We have struggled alongside my daughter. We have all felt the fear, the mania, and the anxiety.

Medication has changed, and then changed again. There have been countless psychiatrists, diagnoses’, and appointments.

I often feel like I am fighting this fight alone. Spartacus against an endless army of Romans. Any small victory constantly overshadowed by the harrowing battle still ahead.

The truth is I am scared; terrified really.

Will we ever truly escape the jaws of Cerberus? Escape and take our first full breath of cool air, fresh with the morning dew.

Mental illness is real. There is no one to blame, and no reason to hide.

I pray for any parent who has lived this life alongside me, and hope that one day we may all take our day in the sun together. What Is Rejection Sensitive Dysphoria? The Flu Is No Joke – Keep You…