Parenting teens is incredibly isolating because you can’t always talk about it.

“Mom! You’re gonna be getting a call from the Principal. He called me out of class and down to the office to talk to him. There’s a girl who’s accusing me and some of the other guys on the team of harassing her. She said we’re asking her to send us nude snapchats.”

This was the call I got from my senior in high school son one February afternoon.

My lunch with friends was interrupted by his call. I was unnerved.

“Wait…what? Who accused you? Did you ask her to send you nude pictures? What’s going on?”

And thus began yet another isolating adventure of raising a teenager. (For the record, after a few days, the accusations thrown at my son and his teammates were proven to be 100% false.)

At this point of time of being a parent I’d been through other isolating parenting adventures.

You know…the kind of situations that sneak up on you when your child gets to be about 11 or 12 and last until they’re adults. The kinds of things that you can’t talk about with just anyone because it would be a major violation of your child’s privacy.

The kinds of things that break your heart, leave you feeling helpless, cause your mother rage to surface, contribute to sleepless nights and make you feel like you have a ton of bricks crushing your soul.

When you have babies you get all the advice in the world.

Perfect, well meaning strangers in line at the store offer unsolicited advice to expecting mamas or mamas with littles.

Hell, I’m actually becoming one of those well meaning strangers!

No one tells you how alone you will feel. 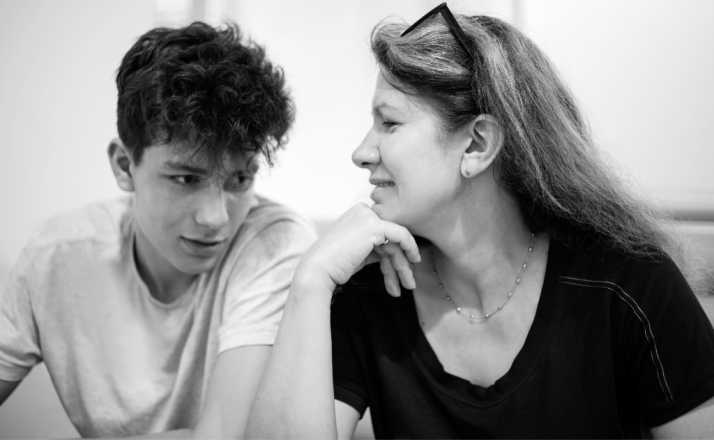 When your kids are little you have a vast support system of other mamas.

Potty training woes? No problem! You ask friends for advice and get 100 different suggestions! Your daughter doesn’t get invited to a birthday party? Easy!

A simple bitch session with your bestie about the mean mom who excluded your daughter diffuses your anger. Then a mommy/daughter date to get some ice cream to soothe your daughter’s tiny broken heart.

So who do you go to when your 6 foot 7 inch, man sized 16 year old son falls on the foot of your bed and sobs like he did when he was a little boy because his basketball coach didn’t play him in his High School team’s nationally televised basketball game?

What do you do when your daughter doesn’t get asked to Prom her Sophomore year. And then again her Junior year. And then 2020 happens and her entire world gets cancelled.

When he’s told he sucks at sports and that he’s a complete waste?

Who do you vent to when your 8th grader is cut from the dance team she’s been on since she was 9?

And who in the world do you confide in when your high school senior is accused of requesting nude snapchats from a random girl?

As parents we know that some of the experiences our teens face certainly aren’t the end of the world. We have the benefit of life experience.

But we also know that not getting asked to prom or not playing in the big game or not making the dance team is a big deal to our teens. We know because we make sure to remember what was important to us when we were in the throes of adolescence.

We understand that the hard situations our kids face day in and day out can’t be advertised on social media. That no matter how frustrated or broken hearted we are for them, the hard can’t be talked about with just anyone.

That the vast network of support we once had, shrunk.

The tough problems kids face are heavy. They are stressful.

And they aren’t ours to put on display to the world because although they gut us just as much as they gut our kids, they don’t belong to just us.

So again, what do we do when we need help and advice about our teens but we can’t solicit advice on Facebook or Instagram from all of our virtual besties?

We surround ourselves with a handful of close family and friends.

For me it consisted of choosing people that I knew I could trust implicitly.

My circle was small but fierce.

They helped me navigate the big problems of my big people.

They helped me understand that all teenagers and their parents are dealing with their own personalized versions of isolated misery.

They helped me realize that I didn’t know about it because, just like me, they were putting on their brave faces and doing whatever they could to protect the privacy of their children.

My circle made me feel less isolated. Less alone.

As parents, our hearts are intertwined with the hearts of our kids. When they hurt, we hurt. That’s why this teenage parenting thing is so complicated.

Their hurts are much deeper than when they were little.

A Mommy/Daughter date can no longer soothe their big broken hearts, although sometimes that can help.

If we encircle ourselves with a carefully chosen tribe of people, we will have the strength and ability, alongside our resilient, incredible teenage humans, to withstand the angst of those adolescent years.

The isolating adventure of parenting teenagers can turn into a rich, rewarding adventure filled with growth, love and laughter.

We can stand back and watch with pride as our incredible teenage humans transform, little by little, into incredible adult humans. 
Hallmark Movies Are Full of Lies, B…