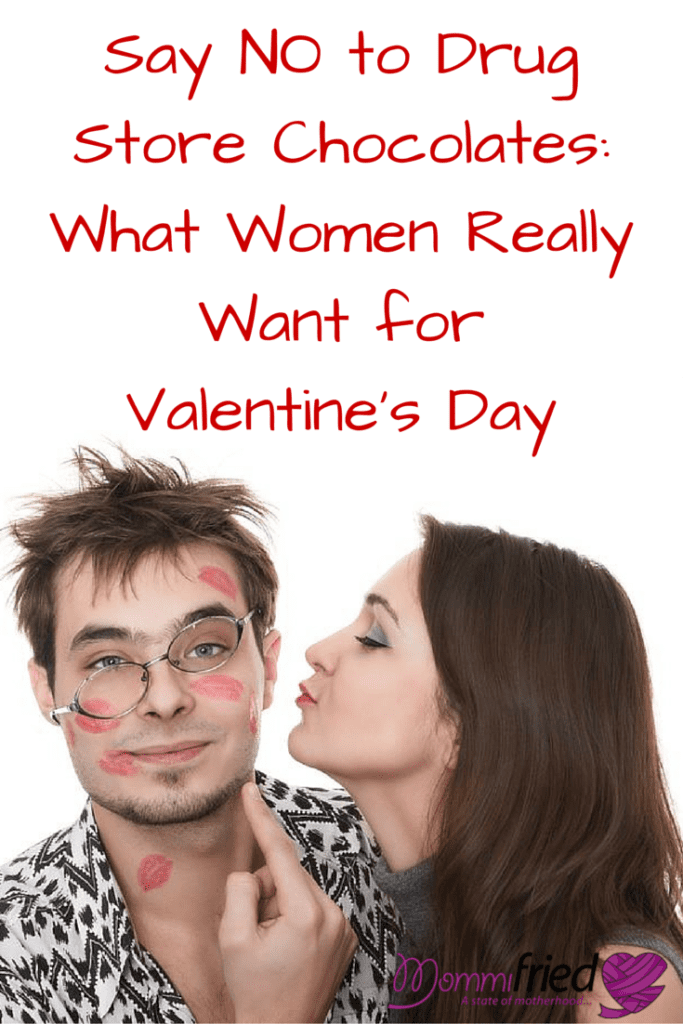 Once upon a very long time ago, when I was young and a complete and total moron, I received a Dirt Devil hand vac as a Valentine’s Day gift. Being a good little wife, I was pleased as punch. No Cheerio would ever again escape my evil suction. I was happy. Gleeful. Until I realized that all of my friends had dozens of gorgeous roses sitting on their desks and countertops. Pristine jewelry glistened from their bodies like JLo’s butt. Some were even sporting new handbags. For the love?

That’s the year I discovered Cupid was a dick and that divorce was a reasonable solution.

Now that I’ve grown up and married someone who buys me flowers even when it’s not a holiday, I find myself wanting something a little different on Valentine’s Day. Vacuums are still out of the question. If I ever see that kind of red again, someone might make an appearance on 48 Hours. Chocolate is a given, but would it be too much to ask for a foot rub while cozied up with a good book and hot cup of coffee? Don’t talk to me. Just rub and ignore?

Surprisingly, a lot of other women agree. We don’t need new Audis or flashy diamond rings. We’ll take them. But when all is said and done, it’s the simple things that would make this day extraordinary.

Here’s what women really want for Valentine’s Day (brought to you by some of my favorite writers and bloggers):

Jennifer Scharf of Momcoms: To sleep alone and not have to wipe (human) or pick-up (dog) poop.

Lola Lolita of Sammiches and Psych Meds: To be able to get a manicure with dark polish without worrying about poop getting stuck under my fingernails without me noticing (I do wash my hands, but still. And also, the baby’s poop, not mine, though I don’t want mine under there either.)

Toni Hammer of Is It Bedtime Yet?: My husband to not only cook dinner, but clean up the kitchen afterwards… to my standards… which aren’t that high… you should see my microwave.

Sarah Cottrell of Housewife Plus: I want an uninterrupted orgasm, to not do dishes, and for my husband to sit through a chick flick and pretend he loves it as much as I do!

Amy Block Hunter of The Outnumbered Mother: I want my husband to leave me a box of Godiva chocolates and take the children out of my sight for at least seven hours. Realistically, I’d like my husband to remember it’s Valentine’s day and maybe say, “Happy Valentine’s Day.” And, of course, world peace.

Jennifer Weedon Palazzo of MomCave TV: I’d like my husband to drop me off, sans child, at an outlet mall for five hours, with the parting words, “Spend as much as you want.” After five hours, he can come back to pick me up and take me to French restaurant.

Janine Huldie of Confessions of a Mommyaholic: Dinner and drinks out without kids to share food with and take to the bathroom right as my hot meal shows up!

C Lee Reed of Helicopter Mom and Just Plane Dad: I want my hubby (Just Plane Dad) to disregard the store bought cards, candy, and flowers. I would love a handwritten letter declaring in his own words how much he loves me and our life together!

Marie Ave’Lallemant Bollman of Make Your Own Damn Dinner: No flowers! The cats just eat them. A nice date night where he takes care of arranging child care and reservations. A meal where nobody spills or needs their food cut up sounds delightful.

Victoria Fedden: I want fondue. Not because it’s romantic, but because I want my own big pot of melted cheese followed up by another pot of melted chocolate and I want to wake up the next morning and miraculously be able to fit into a size 4.

Rabia Lieber of The Liebers: Honestly, my hubby buys very nice, thoughtful gifts. I’ve always loved what he buys for me. Wanna know what I’d like, though? I’d like him to not wait until the last minute and pay $$$$ for shipping!

Lisa Crisp Witherspoon of The Golden Spoons: Would you think I’m totally nuts if I say nothing? I really don’t like V-Day because I don’t want my hubby to buy me something just because he feels obligated.

Kristen Margo Daukas of Four Hens and a Rooster: I let the Rooster off the hook in the very beginning that I would rather he surprise me on some random day with flowers/gifts than be forced to because it’s 2/14. Unfortunately, only half that message made it through… guess which half?

Sarah Halsall del Rio of est. 1975: I want twenty-four hours in which I am expected to do NOTHING. And I mean NOTHING. Not cook a meal. Not watch a kid. Not pick up after people. Not wipe a single butt. Not pack a lunch, do a dish, or wash clothes. And It would not be “saved up” for me either (to do the next day.) I would have twenty-four hours of NO RESPONSIBILITIES AT ALL.

Angela Keck of Writer Mom’s Blog: I want a single day where I don’t have to make any decisions. I don’t want to decide what’s for dinner, what time is bedtime, what bills we should pay today, what errands need run… none of it. I don’t want to be responsible for a single thing beyond consuming coffee.

Samantha Rodman of Dr. Psych Mom: A week in Miami with girlfriends. Might as well dream big.

Traci McNett-O’Neill of Life of a Drama Queen’s Momma: A night out with my husband. ALONE. Any babysitter volunteers?

Brandi Dunlap Stupica of Professor Parenting: I want to sleep for twelve hours, uninterrupted, between the hours of 9 p.m. and 9 a.m.

Anna-May Kendall Jeffreys of Silence of The Mom: A full day/night with the husband, no kids. We’ve had kids every Valentine’s for the five years we’ve been together. I want him to plan the entire day/night including all meals. I want him to send me on a scavenger hunt during the day and to pick up the shoes, dress, and bag he already picked out and paid for and go to a romantic restaurant that night in said new outfit.

Whitney Lang Fleming of Playdates on Fridays: Nothing says love to me like a Roomba. Yes, I want a robotic vacuum cleaner that I can run as I’m schlepping my kids all over town to their activities.

Mary Widdicks of Outmanned: Okay, I’m gonna have to be the one with her mind in the gutter, but how about some really good sex?!? Especially the kind where I’m not 9 months pregnant… but that might just be me!

Jessica D’Pirate of Domestic Pirate: I just want something thoughtful, made/acquired specifically for me. It seems like all the “extra” things we do/get are for the family, which I don’t mind the majority of the time, but it would be nice to have something special done just for me.

Carrie Groves of Ponies and Martinis: I want a thoroughly scrubbed house, my laundry folded, and a whole day to myself where I watch Netflix and read books. (I want this for every holiday!)

Linda Roy of elleroy was here: I don’t wanna cook, I don’t wanna clean, I want dark chocolate, a bottle of Pinot and a foot rub. That should about cover it.

Tracey Zemitis Schaefer of Spitups, Meltdowns, and Blowouts: I want a wife for a day.

Ladies, what do you want on Valentines’s Day?

Ah, technology- gotta love it. While the coronavirus crisis has certainly upended our world as we know it, the internet … Read More