Filter Free Parents
Home Mom Life Humor SNL Skit Nails The Reality Of Every Parent During The Holidays And...

Christmas is less than a week away and to put it mildly – parents are probably freaking out just a bit. There are a lot of expectations surrounding the big day, and parents can only hope it will be a dream, “best ever” Christmas holiday.

That’s why when Saturday Night Live put out their “Best Ever Christmas” skit, parents everywhere were like….YESSS.

Someone gets the hell I go through to make all the magic happen.

The skit starts out with a couple (Matt Damon and Cecily Strong) sitting down after the big day is over to reflect on how “perfect” it was. Because, don’t we always end up loving it no matter how insane the holidays are?

But, what happens next proves to be both hilarious, and an eerily accurate depiction of the crazy holidays that most families experience every freaking year – especially if you’re a parent.

“…had a smile on the face the moment he woke up.”

And in hilarious SNL fashion, the camera cuts to reality – kids bounding into the room at 5:40 AM and Damon dropping the F-bomb at the ridiculous hour as the kids jump on the bed with shouts of excitement.

I kid you not, my kids woke up at 4:30 AM one year, and I don’t remember much else except thinking, how the hell is it possible to be DONE opening presents by 5 AM?

Mom then claims she was more excited than the kids as the camera shows the parents, coffee in hand, bleary eyed as kids tear into presents like bats out of hell.

And if that weren’t realistic enough – the two parents can’t help but reminisce about the joy that was putting together the playhouse for one of their kids – cue Matt Damon kicking a plastic toy house of happiness in his living room while dropping enough swear words to make a sailor blush.

The video is fantastic and proves that all families are pretty much the same.

There’s the crazy cousin that shows up in a Trump hat and accuses the host of being a racist to whites,

there’s the old Uncle who farts in Matt Damon’s face, and let’s not forget the one kid coughing, with snot running out of his nose – because of course someone has to be sick in a video about the holidays.

The truth is, it’s so relatable because it’s true.

We’re all basically living the same life, and just trying to survive the crazy that comes with the holiday season.

The best part for me was of course when Matt Damon’s character showers his wife with praise calling her “the hostess with the most-ess” when he says, “How do you do it?”

She responds with a smile, “I guess I was just full of Christmas cheer.” as the camera cuts to her several times throughout the day chugging wine and sneaking a cigarette in the backyard.

And, mothers everywhere know the truth – we’ll kill ourselves to make the magic happen and when it’s all said and done, we wouldn’t want it any other way. 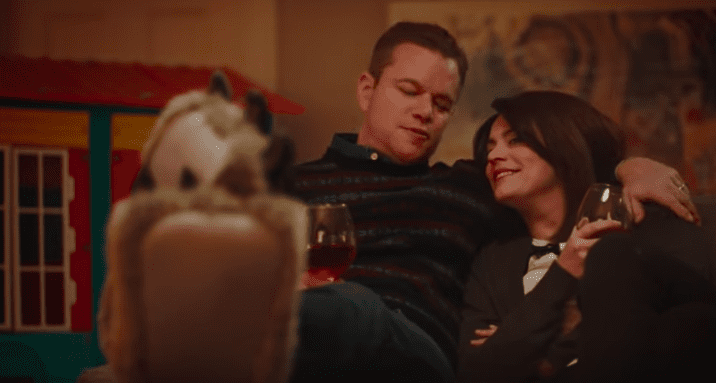 Because, no matter what happens –

it will still be the best. ever. Christmas.


What is Vabbing? One TikToker Expla…

I love the internet, I really do. There are so many wild things to learn, like time-saving cleaning hacks and … Read More

When I became a mother I wasn’t prepared for it. Sure, I’d read books, I’d shopped for all of the … Read More

While the focus of the world has been on Covid for the past 18 months, another epidemic has been silently … Read More