Filter Free Parents
Home Informative When Do You Start Showing During Pregnancy?

Early pregnancy is a time full of questions. How many weeks pregnant am I? What will delivery be like? But before all that, many newly pregnant women wonder, “When will I start showing?”

When you start showing during pregnancy depends on a lot of different factors.

In general, pregnant women will start showing sometime between 16 and 20 weeks of pregnancy.

Whether you start showing near the beginning of the window or near the end depends on both your pregnancy and your body type. Plus, that’s not a hard and fast window. Many women begin showing before and after that range. 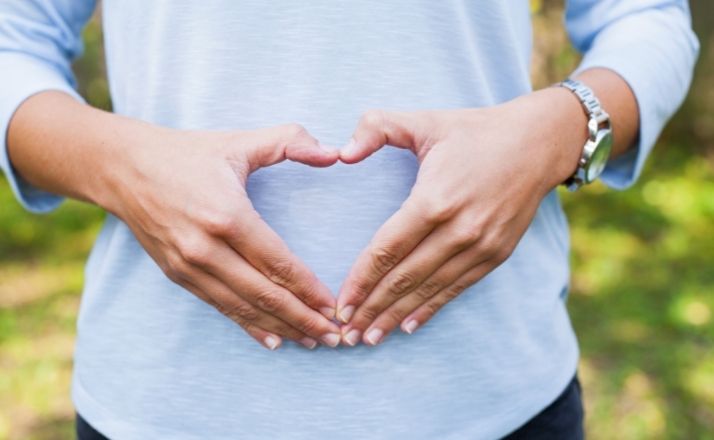 A few questions can help you determine when you’re likely to start showing.

If so, women in their first pregnancy tend to show later than women in subsequent pregnancies (officially called multiparous women). That’s because all the muscles are relatively tight. They’ve never been stretched or moved around by another human being.

The first time you blow up a new balloon, straight out of the package, it requires a decent amount of effort. After that first expansion, the balloon will generally inflate more easily.

This really just comes down to physics. A woman who is six feet tall typically has more room in her frame for a baby to grow than a woman who’s barely five feet tall. In a smaller woman, physics will generally push said baby (and abdominal area) outward a little earlier.

Women who are slimmer or more fit overall tend to show earlier. This is because a little gain in your abdomen is more noticeable on a slender frame.

If you’re a little thicker, a bump in the midsection is more easily written off as just a few extra pounds.

Of course, part of how early you will or won’t show depends on how you dress. Do you want people to notice your growing belly? Tighter-fitting clothes will certainly accentuate it and make you “show” earlier.

Are you hoping to keep your pregnancy undercover a little longer? Looser fitting clothes are your friend here. Big sweaters, wraps, and layers can probably help camouflage your bump a few weeks longer.

This one should be pretty obvious. A woman carrying more than one baby will generally show earlier and carry larger than a woman carrying a singleton pregnancy.

A lot of women think that a bigger baby will make you show earlier, but that’s not really true. The size of your baby may affect your size and appearance later in pregnancy. However, in the early weeks, fetal development is pretty consistent and universal.

When you start showing, your baby will likely be somewhere between 4 ounces (16 weeks) and 10 ounces (20 weeks). That’s not really a large enough range to affect whether or not you look pregnant.

Of course, the true answer to “When will I start showing?” is one every pregnant woman hates: it depends. If you ask around enough, you’ll find short women with twins who showed later and tall women with singleton pregnancies who showed on the early side.

But overall, these general guidelines should give you a good idea of when you’ll start showing during pregnancy.

What you REALLY Need In Your Corona…

The effects of the coronavirus are being felt worldwide. Italy has completely shut down, the stock market is in free … Read More

Valentine’s Day is right around the corner. And the reason we all know it is because the day after Christmas, … Read More