Admittedly, these are rough times, and we can all use a laugh right about now. The endless news cycles are hurting our brains (and hearts), and sometimes well, sometimes the Internet gods step in and provide some levity in a way that only they can.

Case in point, two days ago, a mom named Misty Soulard posted what she imagined was a rant against Target for selling sex toys.

According to her concise sound off, Target “sinks to a new low in its hatred of parents, children, families, and anything appropriate.”

Wow. Ok. So much to unpack here.

Target sinks to a new low in it’s hatred of parents, children, families and anything appropriate.Front and center for…

We don’t yet know if Target has seen this post or intends to respond (OMG, PLEASE RESPOND lol).

But what we do know is that the Internet is pretty convinced about a few things regarding Ms. Soulard.

The “Both holes” comment has captured the imagination and knee-jerk punchline reactions of thousands of people genuinely concerned about this woman’s apparent lack of sex toy knowledge.

Troy Hutch is a dude and even he knows that “both holes” is not how this works. But even better are these friends who couldn’t stop tagging each other in one of the funniest exchanges in the entire thread. 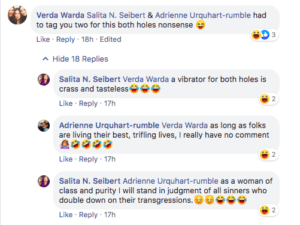 “As a woman of class and purity, I will stand in judgment of all sinners who double down on their transgressions.” LOL!

Honey, those aren’t vitamins in the background. But you might need some of that lube if you plan to try out that toy on the left. We’re just saying.

Ok, I’ll give her that. Vitamin D sounds totally legit.

But seriously, Misty, what store puts lube and sex toys next to vitamins? Pretty sure those aren’t vitamins in the background of this image.

Lady, do you even realize what a deal $29.99 is!? Seriously, have you not been to any boutiques to see how pricey those things get?

Dude, I KNOW. I get left out too. But so do these ladies who are wondering if maybe there’s a coupon somewhere we can find.

If your children know what those toys are when you aren’t super clear on what they are yourself, then we have some questions.

What she said! Not every aisle is appropriate for kids. Any decent parent would know to avoid this aisle and maybe not stop to point it out by taking a picture. Holy crap, lady.

We were’not the only ones thinking this is a hugely problematic issue with this viral rant. Debbie Ann out the obvious.

FIVE: You’re a troll account. For sure. And I’m not the only one who wonders about this.

Melissa Cothrine nailed it when she called this viral post out. And she’s not the only one, dozens (maybe hundreds!) of others thought this is was a fake comment.

Amy Wiedmeier is also pretty sure this is a fakity fake-fake comment. WInning attempt at going viral indeed! But don’t worry, Detective Karenn in on it.

After checking out the account for “Misty Soulard” a couple of things became pretty apparent.

This person is probably a Russian bot.

Or this person is a right-wing conspiracy flinger who is trying to start some shit with Target.

The only posts on “her” account are highly inflammatory images of liberals.

The account appears to have been made in haste and for a specific purpose to start fights online.

Lately, there has been plenty to fight about when it comes to child safety.

For the most part, people seem to know BS when they spot it and are having a grand time leaving hilarious comments in the thread.

But seriously, “both holes” cracked me up. There are tens of thousands of hilarious comments, which is great because when we can’t figure what the hell to watch on Netflix, this is at least a season worth of scrolling.