The whole flying thing scares me. I’ll get that out of the way now, before you think I’m one of those people who has racked up 9,746,997 frequent flyer miles (hells no!).

It’s not the being in the air at the mercy of some unknown pilot or the treacherous seagulls trying to migrate into the engines that makes me uneasy. I mean, shit happens, right?

What really drives me to drink cheap boxed wine are the people we encounter when flying. The faces might be different from flight to flight, but the personalities are always the same. 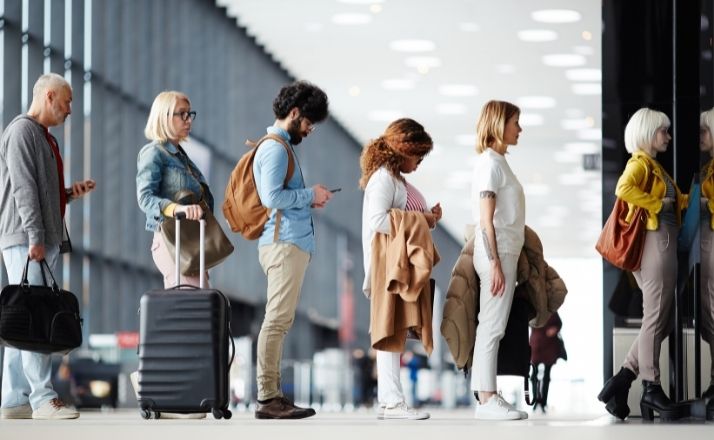 Here are 10 you might recognize through the faces of iconic TV characters:

Charlie Harper, Two and a Half Men (The Douche Bag):

He’s the creepy TSA dude who should be diligently checking that your face matches what’s on your documentation. Instead, he’s busy checking out your batoonies while complimenting you on your great hair.

Carrie Bradshaw, Sex and the City (The Flying Diva):

This chick can be seen dragging 13 overstuffed suitcases while wearing 6-inch stilettos. All the while, the person behind her is silently screaming, “Bitch. Get out of my way! I have four minutes and thirty seconds to make it 5.5 miles to the terminal on the other side! I’ll run you and your walking weapons over if I have to!”

This is the guy looking over your shoulder as you’re reading the newspaper while waiting to board. You can feel his breath hitting the side of your face. His cheap cologne singes your nostril hairs. As you dream of smashing him over the head with your carry-on, he shifts in his seat to get a closer view.

Opposite of the The Nosy Nuisance is The Chipper Chatterbox. She’s the extroverted motormouth that you can’t escape or turn the volume down on. She’ll talk your ear off about anything—the weather, politics, fashion . . . even recent plane crashes. Guh!

Dwight Schrute, The Office (The Noob):

It takes a bit of common sense and street smarts to finagle your way through an airport and onto the right flight. The Noob often lacks both, looking both socially awkward and completely misplaced.

Ben Stein, as Himself (The Cheesy Chief):

He’s the monotone pilot who makes you feel safe, but uninspired. On one hand, he’s not a tweaker. That’s good! Your chances of landing safely on other side just went up! On the other hand, he’s so f**king boring you want to breathe deep into your air mask and pretend you’re Darth Vadar.

She’s the fast-talking, caffeine-infused flight attendant who’s moving at the speed of a two-year-old hyped up on Easter candy. You feel a rush of air as she whips down the aisle by you.

There’s always one among us, no matter where we happen to be—even thousands of miles in the air. He starts off bar-hopping at the terminal and continues his drunken escapades in-flight, until he’s hung over (literally) and snoring as loud as a lawn mower with a nitrous kick.

As the jet hits the runway, she quickly unlocks her safety belt and starts grabbing her stuff. Before the pilot has a second to announce the plane’s obvious safe arrival, she’s already thrown half her body into the aisle so that she can snatch her belongings from the overhead and get off the plane first. In her hurried state, she crushes, jabs, and elbows everyone within a five-foot radius.

Gordon Ramsay, as Himself (The Luggage Loser):

As soon as Claims announces that The Luggage Loser’s bags are nowhere to be found, this snap, crackle, and pop loses his ever-loving shit with a very public temper tantrum. You’d suspect he was smuggling exotic lemurs into the country judging by his reaction. Calm.Down.Dude.

What TV characters have you witnessed while flying?

**This post was inspired by “15 Disney Characters You Will Work With At Some Point” found at one of my favorite blogs, The Shitastrophy.**