Filter Free Parents
Home Health + Wellness Puberty In Boys: What Can You Expect?

No matter how much parents may want to escape it, puberty is an undeniable rite of passage all children go through. Dealing with puberty in boys and the changes it brings can be challenging, for parents and sons.

One day your sweet little boy is snuggling his Winnie the Pooh, the next he smells like sweaty old socks, and his upper lip has smudges that can’t be erased.

According to its official definition, puberty is “the period during which adolescents reach sexual maturity and become capable of reproduction.”

Unofficially? It is the period during which adolescents are riddled with acne, raging hormones, and mood swings so quick they’ll give you whiplash.

Wet dreams, erections, and Axe body spray are all part of your vocabulary now.

Puberty in boys is triggered by hormones released by the brain that cause the testicles to develop. This results in a significant increase in testosterone production. Testosterone, also known as the “sex hormone,”  is created in the testicles along with sperm cells.

At what age do boys hit puberty?

In comparison to girls, boys are typically late bloomers when it comes to puberty. For males, puberty usually begins around the ages of 11 or 12.

However, it can start as early as 9 and as late as 14. If it begins before the age of 9, it is considered “precocious” or early puberty.

According to WebMD “puberty is considered ‘delayed’ when there are still no signs of sexual growth or development by the time a boy reaches age 14.”

Parents should consult with their doctors if their child has signs of early, or late, onset puberty.

Puberty typically ends by about age 16 or 17 in boys.

The onset of puberty can be affected by diet & nutrition, body weight, and environment. A low birth weight tends to be associated with later development, whereas obesity has been correlated to early-onset.

Genetics also plays a role. Often, your son will hit puberty around the same age you did.

What are the signs of puberty in boys?

Puberty doesn’t just bring on physical changes, it exacts emotional changes as well. These changes occur over a period of several years.

A boy’s body goes through a number of changes during puberty so it’s no wonder it can be a confusing and difficult time in their lives.

Testosterone plays a starring role in the life of your adolescent boy.

Not only does it promote physical growth and changes as cataloged above, but it is also the catalyst behind sexual maturity as well. Part of sexual growth and development includes the male body’s ability to produce sperm and ejaculate.

Hormones wreak havoc not only physically but also emotionally during puberty in boys. Fluctuations in testosterone, estrogen, and progesterone fuel mood swings and intensify emotions. 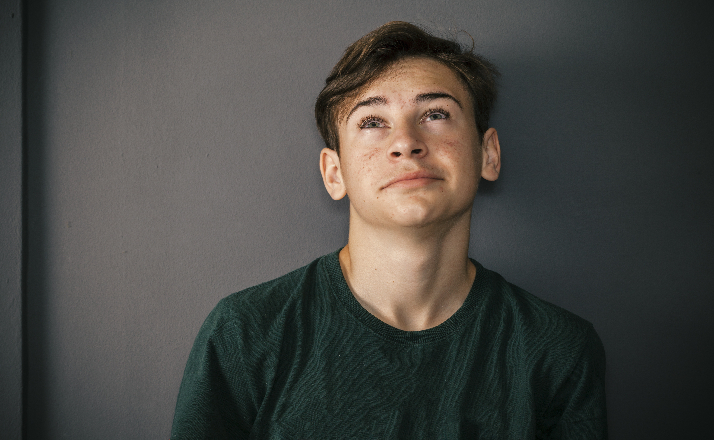 Mood swings: Riding the rollercoaster of pubescent emotions can be exhausting. One minute your son is excitedly rambling on about Fortnite, the next he is hunkered down in his hoodie, airpods in, annoyed with the very sound of your breathing.

Emotional outbursts: Anger and hostility are common by-products of adolescence. Teens are trying to discover where they fit in this world and are struggling to assert their independence. Oftentimes this struggle for separation from their parents manifests itself into angry outbursts and bouts of irrationality.

How can you help your son deal with puberty?

If you struggle with broaching the topic with your son, there are several books available that can help ease you into the conversation. Or talk to your healthcare provider for resources.

Knowing what to expect, for both parents and sons, goes a long way in helping both of you survive the pubescent years.