Filter Free Parents
Home Kids Elementary This is The First Year My Kids Don’t Believe In Santa, And...

The day my oldest son learned the truth about Santa, everything changed. The Tooth Fairy was the first to fall that day and by the end of the night, my oldest baby was standing at the foot of my bed asking me if “it’s all been a lie.”

My heart broke as I looked at his quivering lip and his tear-filled eyes.

That last magical bubble of childhood was crumbling before me. Saying goodbye to the magic of Santa was a symbol of his childhood moving towards adolescence and adulthood and it crushed me—and him.

While I knew we would still do our best to create Christmas magic for him, I also knew the magic would never be quite the same.

We weren’t ready—not at all. But, we still had one believer in our house and so my husband, my oldest son, and I held our breath while we waited for the day our youngest would ask us to tell him the truth.

We thought to ourselves—surely he must know by now.

After all, we are talking about the child who came out of the womb super critical about the world. This is the child who is wearing an expression on his face that clearly says “WTF is wrong with this place?” in his very first baby photos.

But, Santa, the Easter Bunny, the Tooth Fairy, and that damn Elf of the Shelf continued to visit our house for three more years.

Still, nothing. No questions. No hesitations. Anytime we would put out some feelers, we would feel quite certain that he still wholeheartedly believed.

When my nieces and nephew asked their parents to tell them the truth about Santa, my husband and I decided the gig was up.

In a family of six cousins, my youngest was suddenly the only one other than the six-year- old who didn’t know the truth.

It was time for us to tell him.

We posed the question about whether or not he believed and he shot us both his infamous side-eye and flashed his double-dimpled grin. Clearly he already knew.

But, behind his mischievous smile was a hint of fear and sadness.

“Oh. I’ve known for a long time. I just didn’t want to tell you and make you sad—and I didn’t want Santa to stop coming.”

Once again I was crushed but this time not because the magic was ending but because I wasn’t with him when he realized the truth. How stressful for a child to wonder what would happen if he told us that he knew about Santa.

What a big thing to carry around for so long.

In that moment, I wished we had attempted this conversation earlier. Maybe in trying to keep the magic alive for so long, we allowed some sadness and fear to creep in. 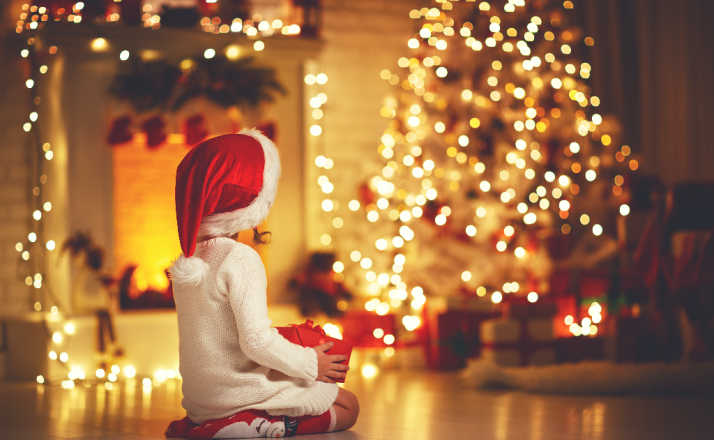 But, we reassured him that Santa will still come this year. He will always come!

This year’s Santa will still hide the presents and wrap them outside of the children’s eyesight. He will still wait to put the gifts under the Christmas tree until everyone has gone to bed on Christmas Eve.

He will still wrap every single item in the stocking (curse you, family tradition!) and our Elf on the Shelf will still leave fresh chocolate chip mini muffins out on Christmas morning.

Our youngest breathed a sign of relief. It seems that not a single one of our traditions will change.

But, what will change is the secrecy.

This year there will be no need for me to turn into a stealthy ninja sneaking gift wrapping sessions while the kids are out of the house, smuggling presents into the house while they aren’t looking, finding time to quietly bake and then freeze chocolate chip mini muffins, or jumping out of bed in the wee hours of the morning to move the damn elf.

This year we won’t need to stay awake waiting for our children to fall asleep on Christmas Eve to make sure they don’t hear us stacking gifts under the tree.

This year there will be less stress and more freedom.

As I approach this holiday season, I already feel a lightness and a sense of ease. While we can still have surprises for the kids, there is space to just lean in to the holiday cheer and to not worry so much about keeping the magic a secret.

Although the magic of Christmas that has graced our house for 15 Christmas seasons is no longer in our lives, in it’s place is a new magic—the magic of honesty.

I’ll always miss the old version of Santa but both versions are magical and maybe, just maybe, this new version is my favorite.

You know, there have been a lot of headlines lately that have made me scrunch up my brow and mutter, … Read More