“As a parent, I have made MANY calls to poison control. Most of which consisted of me freaking out over something totally harmless. Like my kid eating a non-toxic, washable marker but all I saw was their red-stained mouth and convinced myself they were bleeding out.

Anyone on the receiving end of the poison control hotline HAS to have some good stories.

But, I can say with utter certainty that not one of them could compare to this. THIS. IS. GOLD.

Abby Jimenez recently shared this story on social media that quickly went viral and it might be the best thing that’s happened to Facebook since Zuckerberg himself. Also, I just can’t stop fucking laughing.

“So last night my husband took some Ex-lax. Then this morning, some shit started going down. Like, literally.

He looked at the packaging and realized that when it said to eat 1-2 squares, it meant the tiny squares, not an entire block. 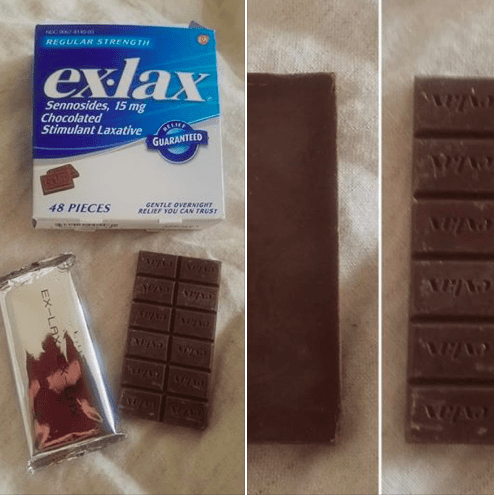 Well, we already know this is going to be SO GOOD.

“So I’m calling Poison Control because he thought he was dying and I literally cannot stop laughing. I’m barely able to talk, I’m laughing so hard. The guy on the other end probably thought it was a prank call.”

I can only imagine that conversation had I been the caller, “No, please, don’t hang up. I swear this is for real. I am just a wife who finds my husband’s pain and suffering like a sweet, sweet gift from the gods for all those hours of tireless labor I endured to bring three beautiful children into this world. But for real tho, is he gonna die?”

“‘The guy was like, “The biggest risks are cramping, dehydration, and diaper rash.’ Motherfucking DIAPER RASH.”

Dear Abby, if you thought your days of stocking up on butt paste were over, you were so very wrong in the best way possible.

“I am not equipped to deal with this kind of crisis. I know it could have been super serious, but OMG. And the funniest part of all is he thought he only took a half dose because he only ate one bar.”

I don’t think ANY of us are equipped to deal with this kind of crisis.

But I’m ever so grateful that she chose to cope by sharing a little slice of comedy heaven with all of us. (But, OMG, could you imagine if he ate the WHOLE DAMN BOX?!?)

I want to make fun of this guy so bad, but I gotta be honest, if I stumbled on anything resembling a chocolate bar I might not be able to stop before eating the whole thing, too.

I’ve been known to cram a few candy bars down without a second thought about it. Ones I don’t even like, but, it was still chocolate. So, who am I to judge?

Except, he knew what he was eating. And he still ate the entire bar.

The impending death he felt soon after surely will stop him from ever doing anything like THAT again.

Thankfully for all of us, he was gracious enough to let her post this experience with the world because if I ever needed a good laugh wrapped up with a great big bow like a present, this is IT.

Abby Jimenez: My husband, who doesn’t follow me on social media: “Has anyone shared the post?”
Me, handing him a Gatorade with a shrug: “A few.”

Don’t worry — he’s fine. Until he realizes that more than “a few” people have seen that he’s exploded all over again, this time on the internet.